Fans flock to the fountains

Droves of fans flocked to Las Vegas Boulevard in front of the Fountains of Bellagio to catch the much-talked about red carpet festivities Thursday.

Fans outfitted in gear from all 32 clubs could be spotted in the crowd, with different team chants breaking out at different times.

Some had sigmas made displaying the picks they hoped their team would make later in the day.

Music was blasted and images were displayed on large LED screens so those not near the front row could take in the fun.

Making memories with friends from all over

Chris Contreras — better known to Minnesota Vikings’ faithful by his moniker Mando Vik for his Star Wars Mandalorian outfit — said Las Vegas is a great host city for the draft.

“This is the most luxurious draft ever,” Contreras said Thursday with the Bellagio stage in the background. “I’ve been to Nashville’s draft, the two cities are in their own element. Nashville has county music, it’s a different vibe. Vegas is the life of the party. What happens in Vegas stays in Vegas.”

Contreras, who hails from Bakersfield, California, was with a group of about 20 who came from all over the country, including Minnesota, California, New Mexico and Texas.

Having such a big group from all over meet for an event like the draft is the ideal scenario for a good time, said Contreras.

“Making memories with my friends and doing what I love,” he said. “Of course we hope to get a good draft pick, but this is what we do and what we love doing.”

Festivities for the NFL Draft in Las Vegas began moments after travelers stepped off their plane at Harry Reid International Airport.

Hundreds of fans arriving in the city Thursday were welcomed to a party, of sorts, in the baggage claim. Airport officials hired a DJ to play pop hits as travelers grabbed their luggage and searched for their rides. The airport also passed out free popcorn and a vendor set up to-go beers and cocktails near the exit, where some tossed back a quick shot and beer to start the party before stepping foot on the Strip.

The Las Vegas Convention and Visitors Authority also brought giveaways and a massive backdrop of each team’s mascot on a playing card, giving visitors the opportunity to snap a group photo.

Dressed up in a Raiders jersey and hat, Los Angeles resident Richard Rodriguez was eager to get to the Strip and his hotel room at the Flamingo to check out what is set up for fans. The P.E. teacher has been a lifelong Raiders fan since they were based in L.A., he said, and he now follows the franchise.

“The NFL Draft is on my bucket list, and what’s better than Vegas?” he said.

But not every traveler was aware of the NFL Draft’s huge footprint in Las Vegas this weekend. Boston resident Michele Poole said she and her best friend were in town for a girls’ weekend of a three-night stay at the Virgin Hotel Las Vegas, courtesy of an Instagram sweepstakes she won.

“I am so stoked,” Poole said. “First off, it didn’t even occur to us that it was draft weekend. We walked in, we’re like, ‘Whoa, there’s even more hot guys than usual in Vegas. That’s why!’”

Others were in town for more traditional Vegas entertainment: residencies. Miami resident Maria Crowley traveled with three of her tennis teammates to see Lady Gaga and Michael Bublé. The group is staying at the Aria and plans to attend draft-related events while in town.

“(My friend’s) husband said, ‘Honey, make sure you bring something from the Jets!’” Crowley said.

The area features an interactive theme park, NFL player appearances, food and beverage options and specialty retail items available only in Las Vegas for the draft.

The fan experience is located next to the draft theater, which sits behind the Linq hotel.

The National Weather Service issued a high-wind advisory for Las Vegas with wind speeds of between 30-45 mph possible on Thursday, but the NFL’s show will go on, even if it gets windy.

Part of Strip shut down for press conference

In what might be one of the most unique news conferences in Las Vegas history, officials kicked off NFL draft festivities Thursday from a stage in the intersection of Las Vegas Boulevard and Flamingo Road.

“Doing this is not easy,” said Steve Hill, Las Vegas Convention and Visitors Authority president. “This is the first we have ever shut down Las Vegas Boulevard for a press conference.”

During the event, Las Vegas Boulevard between Flamingo and Bellagio Drive was renamed Draft Drive for the three-day event.

Gov. Steve Sisolak said it is a surreal day for Las Vegas, especially with the city’s experience with the league in the past.

“I remember when Las Vegas couldn’t get an ad on during Super Bowl,” Sisolak said. “Now we’ve got the draft, we had the Pro Bowl coming here and the Super Bowl. It’s just amazing.”

NFL Commissioner Roger Goodell said he was relieved to finally be in Las Vegas after the 2020 draft was postponed due to the COVID-19 pandemic.

“It’s exciting to think when we think back to two years ago, when we were supposed to be here for the 2020 NFL draft and I got detoured to my basement,” Goodell said.

Goodell is looking forward to a long-standing relationship with the city and big events going forward.

“Think about this, we just had the Pro Bowl here… you now have the draft here and Super Bowl 58 is coming here in just two years,” Goodell said. “Three of our biggest tent pole events coming to Las Vegas in a five year period. I think that speaks a great deal to the commitment of the Raiders, to the NFL, or Las Vegas… to what we can all do together.”

Getting their gear on

Inside the NFL Store at the Forum Shops at Caesars, Sandy Conklin was decked out in a San Francisco 49ers jersey along with a massive gold chain with the team’s emblem attached. A few other shoppers inside the store could be seen with a similar necklace.

The Houston, Texas resident said he picked up the tchotchke for himself and his young son, also wearing a 49ers jersey, in downtown Las Vegas. Conklin said this was his second NFL draft experience, adding that he attended the draft when it was in Dallas. “We haven’t made it to the (NFL draft) experience yet, because that’s what I did back in Dallas,” he said. “But when I was at Dallas we had tickets where here it’s a first come, first serve so that’s going to be a little different.”

Conklin said you can tell there are a lot of NFL fans in town. “Definitely last night walking down Fremont Street you can see there’s a lot of NFL fans here because everybody’s sporting their jerseys, their bling and everything else,” he said. “We flew in last night and on the flight people were decked out in their NFL gear ready to go.” 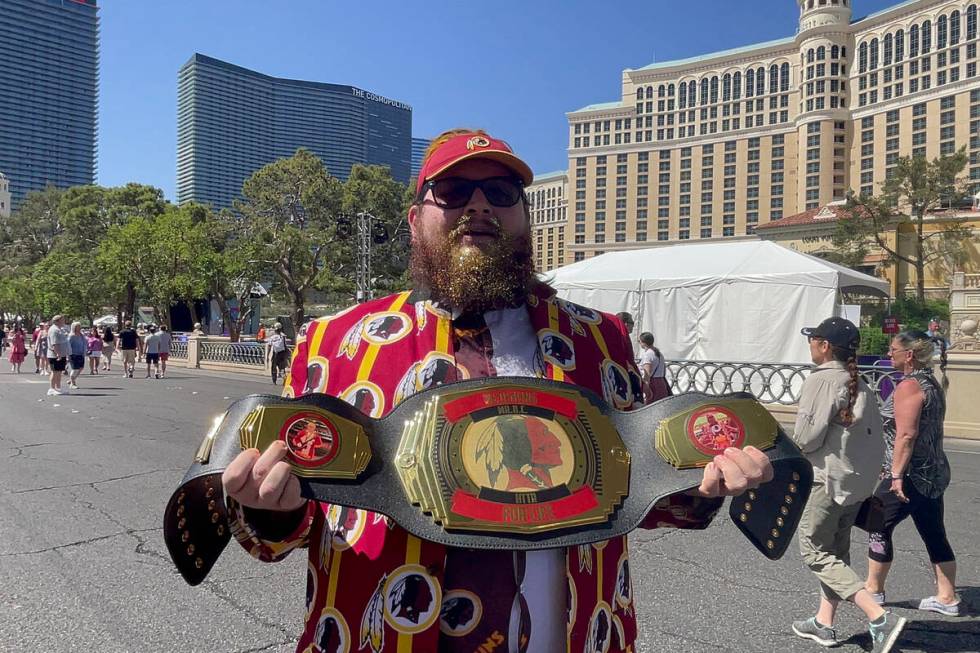 One of the early fans walking down Las Vegas Boulevard in front of the Bellagio was hard to miss.

Edward Friton from Winchester, Virginia, was decked out in a Washington Redskins suit and donning a Washington-themed wrestling championship belt. He also had glitter caked into his beard.

(The team formerly known as the Redskins has changed its name to the Washington Commanders.)

“First of all I’ve got the Redskin shoes, had to go with the bow tie, a regular tie moves too much in the wind,” Friton said. “I have my grandfather here (on the championship belt) he was in the marching band of the Washington Redskins. Yes, I am a Redskins fan for life.”

“I’m goofy, it didn’t take me that long to come up with the concept,” Friton said. “The jacket I’ve had for years. It used to be my Thanksgiving jacket.”

Friton arrived in Las Vegas on Tuesday to take in the sights before the draft kicked off.

He appreciated that a portion of the Strip was shuttered. “It’s a lot easier to get around,” Friton said.

After a two-year delay, the NFL draft is finally kicking off in Las Vegas.

The three-day event begins Thursday with the NFL Draft Experience opening at noon.

Official draft activity will start at 1:45 p.m. over the much talked about red carpet stage over the Fountains of Bellagio. There the top prospects in this year’s draft will walk the stage, making media rounds, before being shuttled to the draft theater area behind the Linq.

The draft is expected to draw around 200,000 attendees daily, paving the way for what may be the largest event in Las Vegas history. The Strip in front Bellagio Drive to Flamingo Road is shut down to vehicle traffic, as is Flamingo from Las Vegas Boulevard to Koval Lane, to allow fans to take in the draft experience at both activity hubs safely and seamlessly.

If previous drafts are any indicator, many fans will be dressed in outlandish costumes representing their favorite team, The draft has become known as the marquee fan event for the league since it started taking it on the road in 2015.

The NFL had planned to hold the draft in Las Vegas in 2020, but was forced to make it a virtual event because of the COVID-19 pandemic.