The Mirage volcano wasn’t designed to be iconic.

It wasn’t intended to inspire imitators and ultimately change the face of the Strip.

It was built to obstruct the view of other casinos.

“Wherever there was a neon sign or something intrusive, we blocked it,” Steve Wynn told the Review-Journal in October 1989, less than a month before he opened the lush resort. “It would have been no good to design this environment, then walk out and get hit in the face with the neon.”

The developer simply wasn’t a fan of the noble gas and the ubiquitous signage in which it was used. “I’m burned out on neon,” Wynn said in the same interview. “I think it’s cheap.”

In a cruel twist of fate, renderings of the guitar-shaped hotel that will replace the volcano, at some point after Hard Rock International’s takeover of The Mirage is complete, show it gleaming as though every last bit is dripping with the stuff.

When it debuted, the volcano was the sort of attraction that stopped traffic. Literally. It was so unlike anything people had seen, a sign warned drivers heading south on Las Vegas Boulevard: “Please drive carefully. And for your own safety, try not to be distracted by the hotel on the right.”

Families. Hardened gamblers. Newlyweds. Grandparents. The volcano was for everyone, and the public simply couldn’t get enough of it. With its mix of waterfalls, fire and smoke, the volcano was right there, for anyone to see from the sidewalk, for free.

“It definitely was something that changed the way people thought about what casinos were supposed to look like,” says David G. Schwartz, professor and gaming historian at UNLV.

Given the way crowds flocked to see it, it’s little surprise that the Strip’s next three resorts — Excalibur, Luxor and Treasure Island — each put their own spins on the volcano, with free, water-based spectacles front and center.

The early ’90s was a wild time to be a tourist in Las Vegas. If you were so inclined — and wearing comfortable shoes — you could start at Treasure Island, where characters aboard a pirate vessel and a British warship waged explosive battles as many as seven times a day. After heading next door to see the volcano spit fire, you could trek to Excalibur, where a mechanical Merlin encountered an animatronic dragon in the hotel’s moat. If you still had the energy, you could cap off your journey at Luxor, with its 300,000-gallon Karnak Lake and its more than 100 computer-controlled fountains.

All of that was available without venturing within a hundred feet of a casino door.

It was the era when Las Vegas began courting families with bigger and bolder ideas — and before the corporatization of the Strip, which demanded ways to monetize every square inch of a property. Case in point: After an almost exactly 20-year run, the last 10 of which were as the retooled “Sirens of TI,” the pirate show was shuttered to make room for a CVS.

Schwartz describes the Strip before the arrival of The Mirage and its volcano as “workmanlike” and credits Wynn’s showmanship for the change.

“I think you have that idea that you can’t just give people slot machines and craps tables,” he says of the years after The Mirage’s opening. “There needs to be something else. There has to be that romance, that mystery, that drama to lure them in.”

Wynn would expand on Luxor’s fountain show concept in 1998 with the opening of Bellagio, bringing the shared influence full circle.

In a sign of just how much the Strip has changed, nothing close to those attractions has opened in the quarter century since Bellagio.

The only thing that even resembles them is the Lake of Dreams, with its massive animatronic singing frog and birds, at Wynn Las Vegas. The hotel’s namesake made sure, though, that the show was tucked away inside the resort, past high-end retailers including Dior, Chanel and Van Cleef & Arpels.

It’s still free, but viewing spots are largely limited to the upscale Overlook Lounge and Bar Parasol. You can also see it, with a reservation, from the patio at Lakeside, with its “resort elegant attire” dress code, and SW Steakhouse, where Wagyu steaks sell for $75 an ounce.

Here’s a closer look at those attractions that soon will be joined by the volcano in the annals of Lost Vegas: 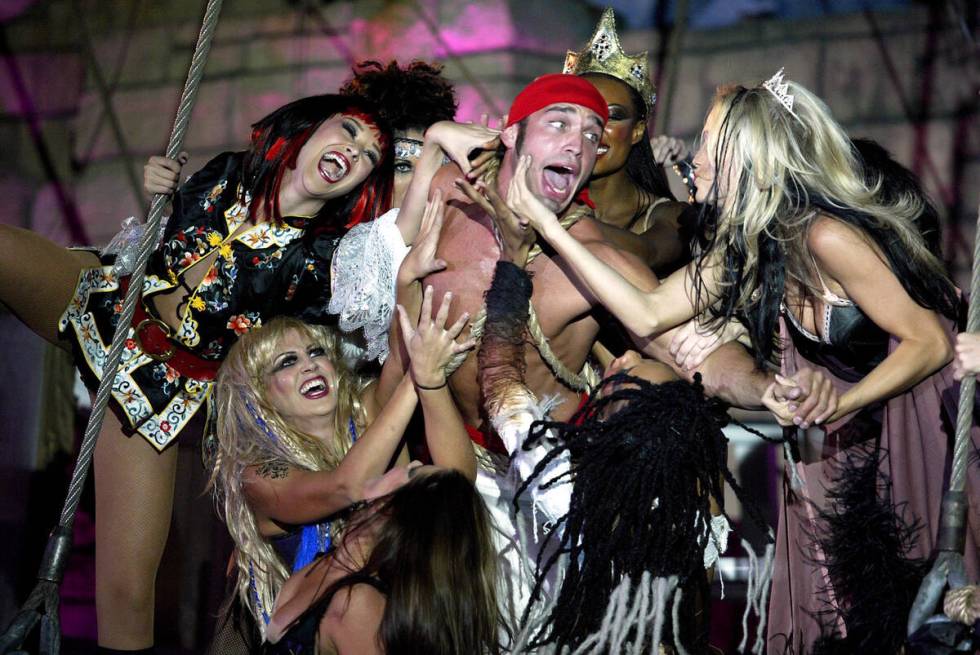 It made zero fiscal sense.

Two dozen cast members performed as many as seven times a day aboard two $12 million, 90-foot ships in the $33 million village known as Buccaneer Bay.

The battle between the crews of the pirate ship Hispaniola and the British ship Britannia, which sailed into view around the corner from Spring Mountain Road, involved trading insults and cannon fire, the latter of which was accentuated by 45-foot fireballs that generated several thousand degrees of heat.

The show was directed by David Sosna, who’d been the first assistant director on movies including “The Blues Brothers” and “Coming to America,” as well as the iconic video for Michael Jackson’s “Thriller.” The stunt work was overseen by Charlie Croughwell, Michael J. Fox’s longtime stunt double, who’d coordinated the stunt work on “Batman Returns.”

“In a movie, you do stunts one at a time,” Croughwell said back then. “But this is 23 separate people doing stunts all at the same time, from different angles.”

Since this was a pirate-themed hotel, the British lost every battle as their sailors fell or jumped overboard. They left the captain, whose voice on the recorded soundtrack was provided by Treasure Island developer Steve Wynn, to go down with the ship as it sank.

Despite hotel estimates that it was attracting 4.5 million visitors a year, the show was retired on July 6, 2003, three days before pirate fever began sweeping the world with the opening of “Pirates of the Caribbean: The Curse of the Black Pearl.”

By then, Treasure Island executives had seen enough families and wanted to chase the younger crowd that was flocking to the Palms and the Hard Rock Hotel. So they came up with a new show, using the occasion of the hotel’s 10th anniversary on Oct. 26, 2003, to debut “The Sirens of TI.” Gone was the British navy, having been replaced by sexy sirens, ladies whose singing voices famously lured sailors to their doom.

With artistic direction by Michael Cotten, who designed Michael Jackson’s “History” and ill-fated “This Is It” tours, and original songs produced by Emilio Estefan, the show was directed by Kenny Ortega of “High School Musical” fame.

The show’s overall aesthetic was a bit like the cast of Thunder From Down Under had sailed into the Spearmint Rhino.

A cabin boy named Eros was lured to The Song, the rechristened pirate ship, where he was held prisoner, eventually leading the pirate crew of The Bull, aka the former Britannia, to attempt a rescue.

What followed was a gorgeous train wreck involving dance numbers, explosions, some light bondage and artery-clogging levels of cheese that put a whole new spin on the words “pirate booty.”

The show ended with the male and female leads going upstairs to a secluded part of the ship with “a little business to take care of.”

If that weren’t enough of a clue that the hotel had changed, there was this lyric: “Are you looking for the arcade? Well, it doesn’t exist anymore. You wanna know why? Because this is an adult candy store.”

Public reaction to the new show could charitably be described as “mixed.” Still, it gyrated on, four shows a night, weather permitting, until Oct. 21, 2003. It never returned from a brief hiatus once it became clear that current Treasure Island owner Phil Ruffin was drastically shortening the renamed Sirens’ Cove to make room for a retail development.

The ships are still there, a monument to bygone days.

The Bull, though, has been positioned in a way that makes it look as though it ran aground at Señor Frog’s, and its crew just decided to stay. 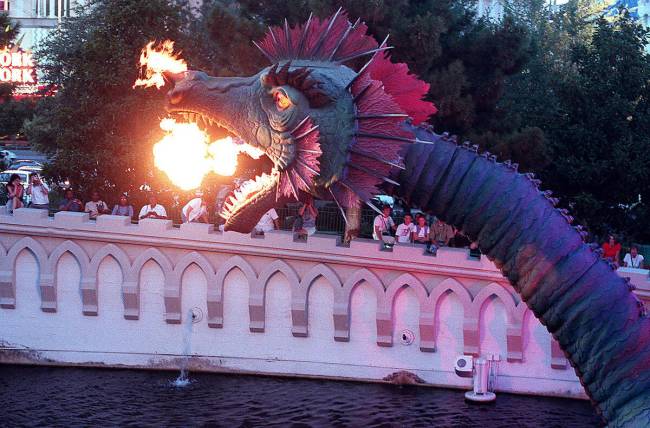 It was billed as one of the largest animatronic dragons in the world. A 70-foot long, three-story, smoke-snorting, fire-breathing monster that roamed the Excalibur moat, every hour on the hour, from 6 p.m. to 1 a.m.

“It took nine months to construct this beast,” animation supervisor Scott Kessel said at the time. “We really wanted to make this dragon look lifelike.”

Excalibur opened June 19, 1990, but the dragon — which we once described as having “hand-painted murky-green scales, glowing yellow eyeballs and a blood-red smile” — didn’t arrive until 1993. It was created by AVG Technologies, the company behind the “Wizard of Oz” display that opened the same year at the MGM Grand.

As for the show, the dragon emerged from behind a gate and lumbered about in a manner best described as “deliberate” — somewhere between the characters at Chuck E. Cheese and those mechanical horses that used to reside in front of supermarkets. It breathed some fire and roared a bit before it began mildly bothering a robotic Merlin. Then the wizard shooed it away with some low-wattage fireworks.

Review-Journal readers voted the show “worst attraction” in the annual Best of Las Vegas polls for 2002 and 2003, then it quietly vanished, leaving behind only memories — as well as Merlin’s cottage and the tracks on which the dragon maneuvered, both of which are still visible in the moat. 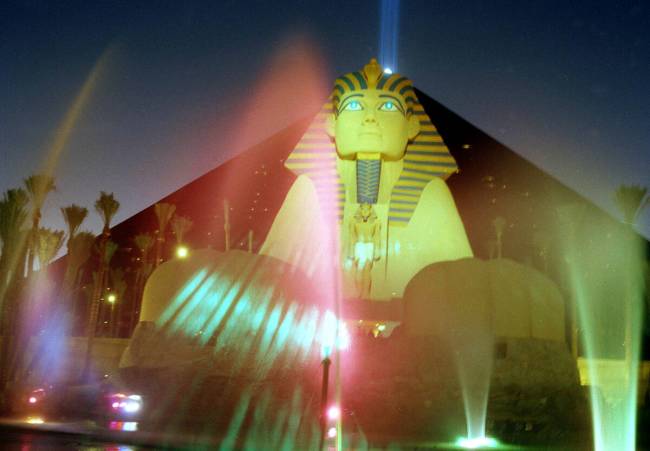 Lasers once shot from the eyes of the sphinx, and lights were projected onto the fountains. (The Associated Press)

Among the attractions that opened with the hotel and casino on Oct. 15, 1993, was the River Nile boat ride that brought hotel guests to their elevators and took others on an 18-minute tour of the hotel, floating by manufactured artifacts and passing through tunnels representing the Tomb of Queen Nefertari and the Temple of Isis.

Then there were the three movielike attractions, collectively known as “Secrets of the Luxor Pyramid,” that were overseen by Douglas Trumbull, the special effects whiz who shared Oscar nominations for best visual effects for “Close Encounters of the Third Kind,” “Blade Runner” and “Star Trek: The Motion Picture.”

The highest praise, though, was reserved for the fountains.

During the day, they’d spout water out of the resort’s Karnak Lake as part of a seemingly endless array of patterns. At night, lasers would shoot from the sphinx’s eyes, setting in motion a process in which more lasers and Egyptian-themed imagery would be projected onto a 60-foot screen of water.

“Luxor officials ‘to a degree’ hope the light-and-water spectacle will displace The Mirage’s erupting volcano as the highest-profile attraction on the Strip,” we wrote on the day of the opening, attributing those hopes to Cliff Hay, then Luxor’s director of rides and attractions.

The sheer variety of water shows that were possible gave the Luxor attraction an edge, Hay said at the time. “(I)f you’ve seen the volcano once or twice, you’ve seen it.”

Today, anyone at the station to catch the tram that links Mandalay Bay and Excalibur can see the remains of Karnak Lake, the fountains and any dreams of unseating the volcano.