The first fusion restaurants born in the ’70s sometimes served up more confusion than anything else. Remember Watergate Salad, that ghoulishly green conglomeration with ingredients like instant pistachio pudding, pineapple and a lingering sense of shame? But my, how things have changed.

Restaurants featuring unexpected pairings of cuisines can be found across the valley, including Japanese-Italian in Chinatown, Latin-Asian in the east valley, Mexican-Italian in the southwest, Korean-Mexican in central Las Vegas and Chinese-Mexican on the Strip. New ones are opening all the time, but decadelong veterans like KoMex, wedged between a security services company and a wire transfer service in a strip mall in the shadow of Las Vegas Golf Club, and China Poblano at The Cosmopolitan of Las Vegas have shown that, far from being a novelty, these spots have ardent followers.

Longtime Lindo Michoacan owner Javier Barajas said he chose Mexican-Italian fusion for his Il Toro E La Capra, which opened on South Decatur Boulevard in January, simply because he likes the food. Barajas came to the United States in 1978. When he saw the movie “Casino” years later, he felt like it reflected his life. 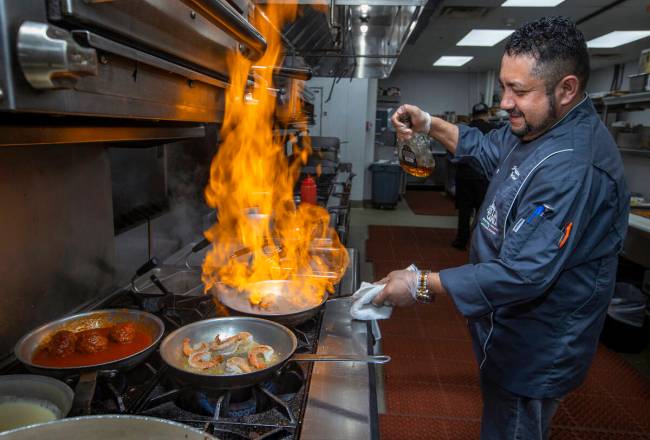 “I saw myself, because I was living in Las Vegas then,” he said. “I used to wait on Spilotro and all those guys. And I used to go to a lot of Italian restaurants to eat.”

A lifelong love was born.

“Besides Mexican, my favorite kind of food is Italian,” Barajas said. “I’ve been to Italy a few times. Every time I go to Italy, all I do is eat as much as I can.”

And so he started wondering.

“Every time I’d go to eat at Italian restaurants,” he said, “when I ordered osso buco or veal scallopini, I’m wondering how this tastes the Mexican way. That was my dream.”

Which became reality at Il Toro E La Capra. His menu lists dishes such as osso buco fajitas, chorizo pizza and carne asada pizza with tomatillo sauce, but he lets customers mix and match between the two cuisines. 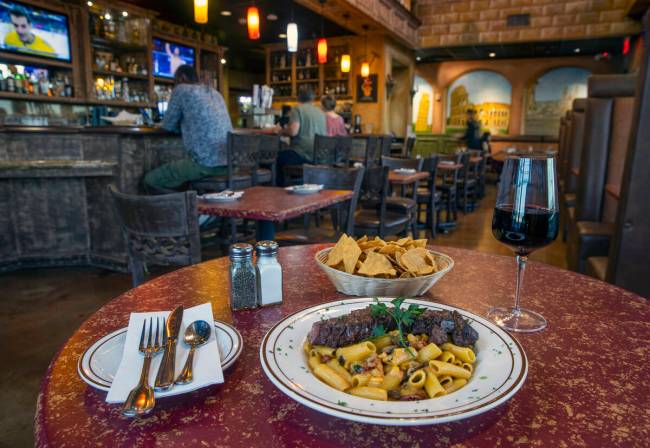 “They have a lot in common,” he said of Mexican and Italian cooking styles. “We use almost the same condiments for everything. In Mexican food we use a lot of garlic, a lot of peppers. Italians, the only difference is they eat a lot of pasta.” 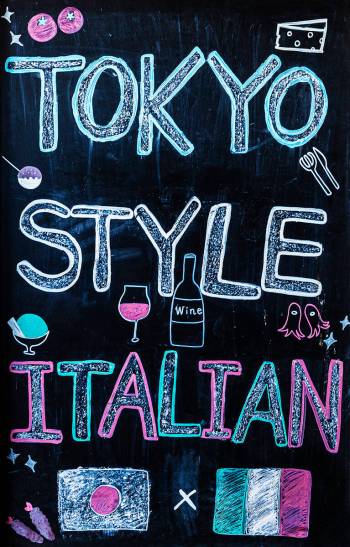 Plus, he said, “the atmosphere and ambiance of the restaurant is unique in Las Vegas,” adding that it reflects the Mexican and Italian cultures through the artifacts Barajas has collected on his travels. They’re surrounded, in the expansive space, by warm colors that evoke both the Tuscan and Michoacan sun.

Kengo Nakamura also is a devotee of Italian food, which he said he learned to cook in Tokyo.

“Italian restaurants are very, very famous in Japan,” he said.

Nakamura said he always wanted to open a Japanese-Italian restaurant in the United States and finally realized his dream about 10 years ago, when he opened Trattoria Nakamura-Ya.

Nakamura’s son, Kota, who’s the restaurant’s manager, said the tiny spot on Spring Mountain Road flew under the radar until about a year ago, when it started getting media attention. 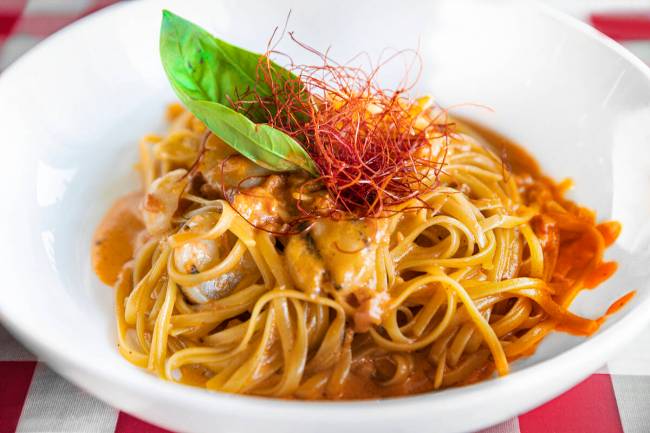 “Most of the fusion types are when it comes to some of the pasta,” he said. “We have some soupy pastas, a little bit like ramen. Miso carbonara is one of our more popular ones.”

Metro Pizza co-owner John Arena, part of the local culinary landscape since 1980, has watched the fusion movement since those first chefs stuck their toes in the water, and he thinks they may collectively define what Las Vegas lacks: a style of cuisine it can call its own.

The evolution seems natural to him.

“Look in the kitchen of any restaurant on the Strip and you’re going to see diverse cultures working together,” Arena said.

With numerous restaurants at every resort, and restaurant workers being a notoriously mobile bunch, they often learn more than one style of cooking.

“We have a particularly communal chef culture in this town, developed over the past 20 years or so,” which leads to lots of collaboration, often between cultures, Arena said. And many of the culinarians eventually become restaurant owners.

An added factor, he said, is that Las Vegas is a community of transplants.

“Everyone came from someplace else,” he said. “They tend to be adventurous; otherwise they wouldn’t have moved here.” And they’re bringing their sensibilities to a culinary community that’s pretty much a blank canvas — “It’s not like we’re in New Orleans, where there’s a New Orleans cuisine.”

Geography also can lead to the fusing of cuisines, because neighboring countries often have similar growing climates, pointed out Christopher A. Lindsay, a chef instructor and lecturer in the Food and Beverage Management Department of the William F. Harrah College of Hospitality at UNLV.

“Chiles grow in Asia as well as Mexico,” Lindsay said. “They have their distinctive flavors, but they can be substituted.”

And colonialism and immigration bring cultural influences that can linger for centuries — vestiges of the French in Vietnam, for example, or the British in India (and, in turn, the Indian influence on English food).

“Pizza came to South America at almost the exact same time it came to the United States,” Arena said. “But you see differences because of the native and cultural influences. Pizza in Argentina looks different from the pizza in Brazil, for example.” 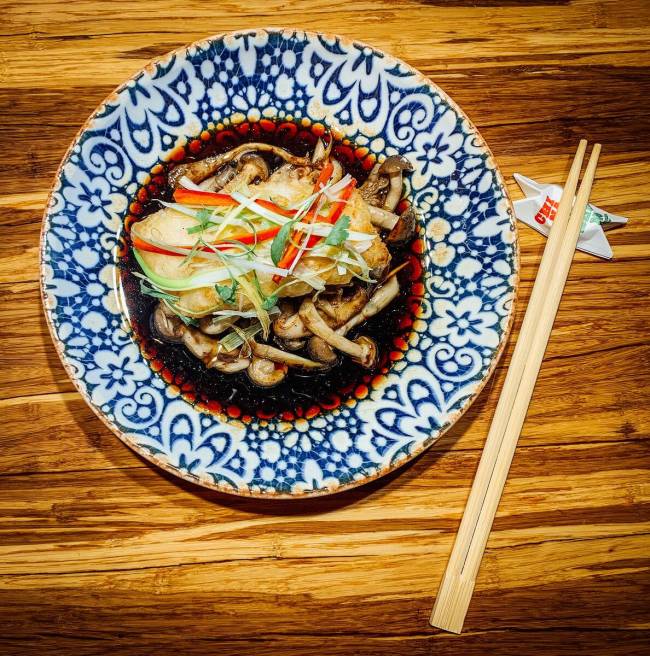 Shortly after he opened China Poblano at The Cosmopolitan in late 2010, the esteemed chef José Andrés said his noodle-and-taco restaurant was a natural because Mexico and China have long had elements of cross-pollination.

“To me, the connection is fascinating,” Andrés said then. “There’s more to it than meets the eye.”

Such connections also can be organic but not widely known outside a defined geographical area. Chef Beni Velazquez, whose ethnic background is Puerto Rican, said his ChinaLatina by Chef Beni on South Pecos Road, which blends elements of his pan-Latin cuisine with pan-Asian, is a product of his upbringing in New York.

“It’s natural,” he said of his menu choices. “Because of the way I grew up, it’s natural. My parents would take us to eat at a Chinese restaurant in Manhattan, on Broadway. The owner spoke Chinese, English and Spanish. Because it was a Latin community, he would sell roast pork and plantains on the side, but it was never on his menu.”

Those foods are on Velazquez’s menu along with typically Asian products, but in fresh new forms.

For example, his lechon steamed buns.

“It’s still pork, but ours is cooked in a different way — marinated overnight in citrus and spices and slow-roasted for about three hours the following day,” Velazquez said. “I take the skin off and make chicharron out of it. I use the meat for the buns and chop up the chicharron and add that to it.”

All of his sauces are made in-house and have copious twists. Instead of teriyaki glaze, he opts for a guava and honey blend.

For his chicken fried rice, the poultry is marinated in achiote.

“We grill it and it gets chopped up to put into the rice,” he said. “We do edamame instead of peas, and add a jicama slaw so you’ve got that crispy kind of apple-flavor crunch.”

He uses soy sauce in the rice, but also sweet chile and sriracha.

“It looks similar, but when you taste it you get this massive explosion of flavor that you haven’t tasted before, but it’s still fried rice,” Velazquez said.

And customer and food blogger Vi Newman appreciates those flavors.

“I love that it’s a different take on things,” Newman said. She said she especially likes Velazquez’s take on one appetizer she likes.

“His tempura shishito peppers are the greatest thing ever,” she said, “battered and fried and topped with a spicy mayo and a cream sauce. They’re my favorite — crispy, sweet, spicy, amazing.”

As for Arena, he’s just looking ahead.

“My thoughts 10 years ago were that Las Vegas was particularly ripe for this type of culinary direction,” he said. “This is fertile ground for a fusion cuisine to develop that will become known as Las Vegas cuisine. “It may take 100 years, but it’s going to happen.”