The nomination process for a James Beard Foundation Award is shrouded in mystery, which is how the group likes to operate. For Hongrui Chen, learning that her family restaurant had been named a semifinalist in the Best Restaurant and Chef category by the prestigious group was also a bit puzzling, especially since she had not heard of the organization or its coveted annual awards.

Her Chinatown eatery — whose name loosely translates to Big Dan Shanxi Taste — is tucked inside Shun Fat Supermarket in the Pacific Asian Plaza on Spring Mountain Road. The menu isn’t extensive but, once tasted, instantly reveals how the out-of-the-way restaurant caught the attention of Beard’s culinary experts. The fragrant and spicy flavors replicate those found in the northwestern China city of Xi’an, where Chen lived with her husband, Peter Xing, son Daniel Xing and daughter Dan Xing before moving to Las Vegas. 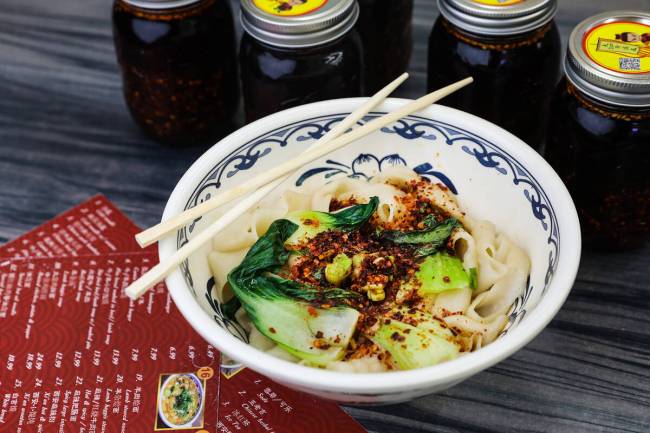 For first-timers, Daniel recommends menu options No. 1 (cold noodles), No. 3 (Chinese pork hamburger) and No. 11 (special hot oil noodle). The noodles in No. 11 are biangbiang mian, an extraordinarily wide and long style of pasta that’s sometimes called “belt noodles” because of their substantial shape. On the side, he also recommends a can of imported orange soda, which is how the dish is served in Shanxi. Other beverage selections include traditional hot herbal tea, refreshing ice tea, tart homemade plum juice and puckery Beijing yogurt. Other authentic Xi’an specialties include cumin-scented beef; lamb haggis soup; shredded wheat gluten with special sauce; spicy lamb intestine noodles, braised shell-shaped noodles; stir-fried bean jelly and hot oil noodles with tomatoes and eggs.

The family’s cooking has many dedicated fans — notably two women who piloted their own plane from Texas to dine on the family’s flavorful dishes.

Peter Xing said that opening in the grocery store four years ago helped the operation pull through the COVID crisis, as shoppers would come in for groceries and then eat, bolstering both businesses.

“When they order something, there’s a 15-minute wait, so they can go shop,” said Daniel, translating from his father’s Mandarin. When they return, deliciousness awaits.